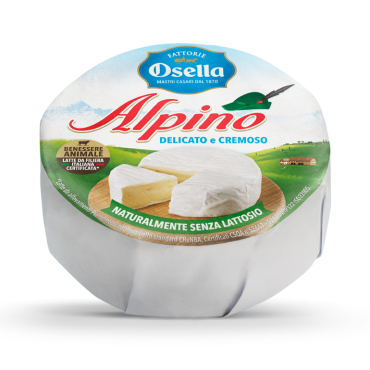 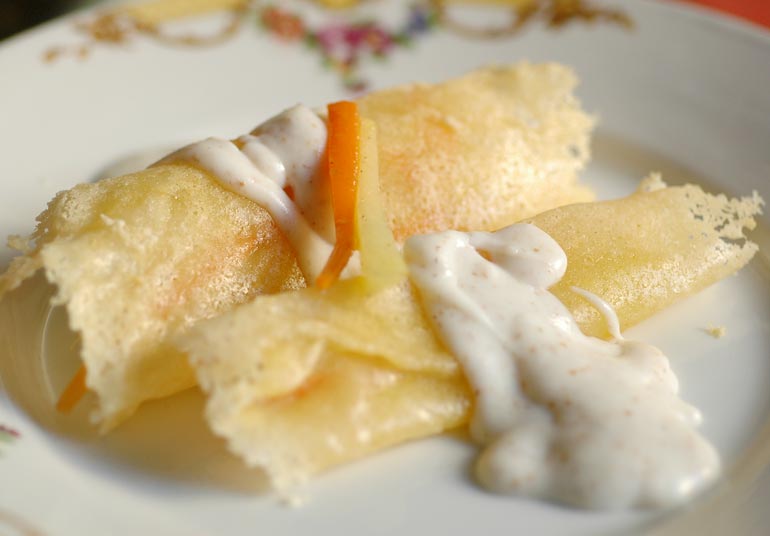 Peel, wash and dry all the vegetables. Cut the carrots, potatoes, courgettes and celery into julienne strips. Heat the oil in a pan, toss in the vegetables and add a touch of pepper. Cook the vegetables for about 10 minutes, leaving them firm. Drain them and set them aside.

Grate the Parmesan cheese. Add a sprig of chives, finely chopped, and mix together.
Grease a small non-stick pan with a little oil, using some kitchen paper. Place the pan on the heat and when it is hot, sprinkle two spoons of cheese over the surface. Leave the cheese to melt.
When a golden crust has formed, take the pan off the heat and distribute some of the previously pan-fried vegetables across the cheese wafer. Roll up the crisp into a cylinder shape using a fork. As you prepare them, place the filled wafers on a baking tray.

Remove the white rind from the Alpino Osella and cut the cheese into cubes; the boil it in a saucepan with the milk. Melt the butter in another pan, add the flour and stir. Pour the flour and butter mixture into the boiling milk and Alpino Osella cheese. Whisk vigorously until the mixture starts to boil.

Heat the wafers in the oven at 180°C for five minutes; then transfer them to plates and add two spoons of sauce. Decorate with a a blade of chive and serve immediately.