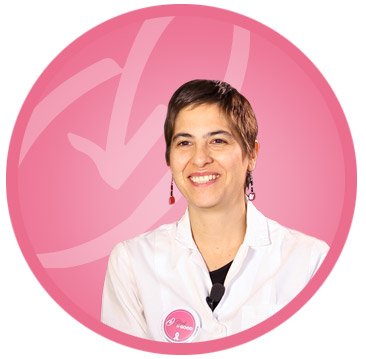 
WHERE SHE DOES HER RESEARCH:
Turin University

Studying a severe illness and then finding that you have it.
This is exactly what happened to research biologist Maria del Pilar.

Exemplary stories are usually different: a person is affected by a severe and still largely unknown disease and decides to devote their life to studying it and finding a cure. That’s not how it was for Pilar. The race to find a cure was already underway when, last year, at the age of almost 40, she found out that she had breast cancer.

«It was a shock, the way it is for everyone I think. You never expect it to happen to you”, she says, “But I was taken aback by the fact that it was exactly the same type of breast cancer (there are different types) that I was and am studying. I was lucky, in a manner of speaking: I knew that there were already “smart” treatments for this kind of cancer, which deliver the drug directly into the diseased cell without touching the healthy cells around it (the way chemotherapy does). And I knew that there were chances of recovery”. So, what is your research for if there’s already a cure for this kind of cancer? “There are other special cases that don’t respond to the treatment available. We are studying the protein p130Cas, which easily associates with other “bad” proteins, making the tumour more invasive».

Of course, the first step was surgery, followed by treatments that allowed a short pause in its activity. The doctor, who was born in Mexico City, works at the laboratory of the Molecular Biology Centre at Turin University, and her work is supported by the Fondazione Veronesi research grant that she has been assigned. She is in Italy because of love: during other specialisations (after her degree in Mexico and PhD at McGill University in Montreal, Canada), she met an environmental researcher from Piedmont, they fell in love and got married.

Treatment and study proceed side by side: once a week, until next November, Maria del Pilar will have to have intravenous treatment. «The advantage of these “smart” drugs is that they don’t touch the healthy areas around the tumour and so have no undesirable side effects».

And then comes the confession: «EWhen I was studying biology, I used to dream of devoting my life to beating different types of cancer. And, in my dreams at least, I succeeded. We’ll see…». Of course, I never thought I’d be making my own personal “contribution”.

Blimp-1, a new regulator of invasion mediated by ERBB2 in breast cancer.

Mammary carcinoma is the most frequent tumour in women and is the main cause of death in western women between the ages of 40 and 50. It’s of crucial importance to understand the molecular changes that take place in mammary carcinoma, in order to develop new and more effective diagnostic, therapeutic and preventive approaches.

ErbB2 is a membrane surface protein implicated in cell division and differentiation.
In mammary carcinoma, higher levels of this protein determine an increase in cell proliferation and ErbB2 is over-expressed in 25% of breast cancers. It has been previously demonstrated that, in mammary cancers, the increase in the expression of ErbB2 and the adapter protein p130Cas promotes the transformation and invasion of the mammary epithelial cells.

In this invasive condition, we have also identified a new potential modulator of invasion, the protein PRDM1/Blimp1.

The aim of the project is to characterise PRDM1/Blimp1 and study the molecular mechanism which involves it in the invasion in mammary carcinoma cells.

Preliminary data shows an increase in the levels of PRDM1/Blimp1 protein in invasive acini of breast cancers positive to ErbB2. Understanding the mechanism with which PRDM1/Blimp1 induces migration and invasion of mammary carcinoma cells will allow future use as treatment targets for ErbB2-dependent breast cancers.